changing-IT founder John Walsh has collected quite a few T-shirts over an IT career which started in late 1973 with the arrival of the first affordable mini-computers.

Working for the first 9 years on the User side of the fence, and with no package solutions yet available, he designed, programmed, implemented and supported bespoke systems spanning Finance, Inventory, Sales, Production, Procurement, Job Costing, Plant Maintenance, and Plant Hire. As the years passed and early IT package solutions emerged, he was responsible for selection and implementation of early MRP systems, then MRPII systems, and finally ERP systems - watching the chameleon shift from lean processes to bloated processes along the way. Early mini’s were based on ICL2903/4 and O/S EXEC, and HP3000 and O/S IMAGE. Packages adopted were ICL OMAC, HP MM3000, CODA Financials, and SUN ACCOUNTS. John’s User-side-of-the-fence journey took in a 2 year spell in Ship-Building, with deep exposure to PERT, the first package solution for Project Planning and Resource 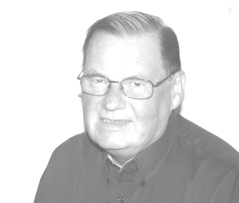 In 1982 he co-founded a small software house based in the West Midlands, and financed by hard-won NCC software development grants, he designed a new (then) modern MRPII solution (these days called ERP) which went on to be sold and implemented in 40+ medium sized UK manufacturing businesses, including some big names, with a team of 35 people. Here, the shifting sands of the technology landscape were never more obvious. When design and development started, flavour of the month platform wise was DIGITAL (DEC) PDP11 servers running O/S RSTS/E. Mid-way through development DEC shifted their focus to VAX and O/S VMS. By the time the MRPII solution was ready to launch it had migrated yet again to UNIX and to RDBMS - 3 major platform shifts in just under 4 years. And green-screen UI’s begat client-server begat Windows desktop begat multi-tasking and a MOUSE !

So, no change there then - since it’s pretty much the same today if not worse - and still no-one

has a crystal ball to help us track the winners for the next 5 years !

In 1991 John became the first UK employee and UK General Manager for Symix, a US developer/author who were looking to bring the Symix ERP solution across the water. John was responsible for seeding the UK business, building the UK team, and early moves into Europe via Eindhoven. The Symix solution, based on the PROGRESS 4GL, was eventually acquired by INFOR, selling the product under the name Syteline, and which was the INFOR flagship product for mid-market enterprises.

In 1999 John joined IFS and spent the following 9 years helping develop the UK market and Customer base for IFS Applications, a Tier-2 Swedish ERP solution aimed at mid-market enterprises, and with strength in Project-centric, Asset Management and Construction business areas. Several large multi-national projects were secured and deployed.

In 2008 John joined SAP UK&I and spent the next 5 years in the “SAP world”, working for both SAP UK&I themselves and also with SAP Channel Partner CSI, to secure greater mid-market penetration as part of the SAP strategy to move more into mid-market business enterprises. For 2 years up to April 2013, in addition to his day-job as a Client Director, John was the Forum Coordinator for the popular SAP Northern User Forum, creating Agenda topical content, and hosting Forum meetings 3 times annually, for almost 100 Company Members with circa 300 Employee Members. John also acted as the UK Member coordinator for SAP United-VARS, a global community of 25 SAP Channel Partners covering 57 Countries, with SAP AG HQ support for annual VAR Partner meetings in Germany.

John has formed changing-IT in order to bring his experience spanning an extensive technical background, coupled with a very wide business background, to assist businesses that seek to OPTIMISE their IT investments towards the goals of the business, whilst also identifying a small number of innovative niche point-solutions that can MAKE A DIFFERENCE. This currently small list of solutions will grow slowly as further “GEMS” are added.

User-adoption remains one of the biggest challenges to the ultimate success of any IT project, thus it always was, and so it still is, despite the massive advances in capability. We all still seek to SIMPLIFY, whilst the technologies underpinning our whole business become exponentially more complex, yet with IT budgets static or reduced, as demand and User expectations soar.

changing-IT is here to provide Services to complement your own Team, and to focus on some of the SMALL things - innovative Applications and smart Solutions, that could have a SIGNIFICANT positive impact to your success.

change - the one thing we can be sure of